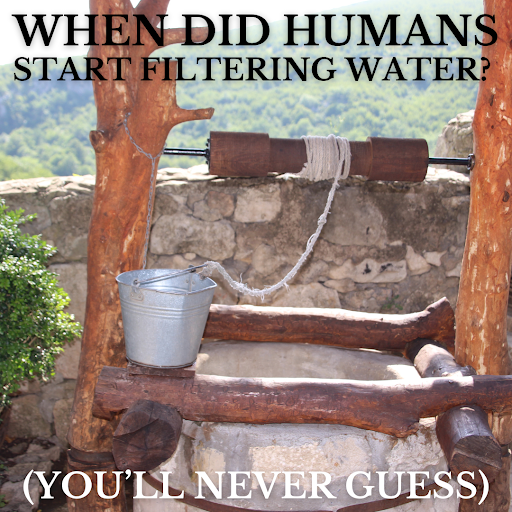 One of the constant needs in life is and has been clean water. Without it, plants, animals, and humans simply would have no sustenance or means of survival. And currently, with the changing climate and environment, clean water is a focal point in our society. Historically, all settlements have naturally clustered around water sources for survival purposes. But was the Earth’s water cleaner before? Or, are we better off now with the variety of modern filtration techniques?

Let’s Go Back in Time.

Well, it turns out that water treatment is nothing new. Purification dates back over 4,000 years ago. Much like today, people believed that if the water was clear, it was clean. But, they soon discovered that without proper treatment, the consumption of water led to various forms of diseases & illnesses. After understanding the biological consequences of impure water, civilizations began to boil and strain their water to rid the source of toxic substances. Later in the 5th century BC, Hippocrates (Greek physician and also known as “the father of medicine”), introduced a new concept. He would pass water through a cloth to remove silt and other sediments. This method, combined with boiled water, continued to be used until the late 1600s. Then, a multi-stage water filter and the microscope were invented. The microscope was able to detect microorganisms and other particles in the water.

In the 1700s, Joseph Amy obtained the first patent for a water filtration system and the first systems were made available for sale in 1750. Over a century later, there was a cholera infection in the UK that led to a new water treatment method involving chlorine and ozone. Finally, the first water treatment facility was built in 1804. The process is not much different than today.

As time marched on, more and more advancements in water filtration continued to emerge, evolve, and improve. We began learning more about what we’re consuming, how to improve it, and what that all means for our health. Fast WAY forward, in 1974 the “Safe Drinking Act,” was passed by congress to protect drinking water. This now meant that there were new standards for drinking water quality.

After the long and outstanding history of water filtration, you would think that our tap water would be of the highest standards. Unfortunately, that is not true. You know this especially if you’ve lived in an area with a “boil advisory.” And, if you google “clean water in America,” you will see answers such as, “the drinking water quality in America is generally safe.” But think about this… would you get on an airplane that was considered “generally” safe? So, for 85% of the population, tap water is generally safe. However, according to a recent report by the Natural Resources Defense Council (NRDC),15% AKA more than 70 million people, may be affected by health-based contamination, including THMs, HHAs, lead, copper, arsenic, and other contaminants.

So, How Can You Protect Yourself and Loved Ones?

Tap water alone is not safe. Filtered tap water is the safest, easiest, and most affordable clean-drinking option. Tap water goes through a complex system of filtration and disinfection before reaching your sink. However, microplastics, pathogens, and other unwanted substances can still be present in the corroded and dilapidated water system in the USA.

We have two-stage and four-stage systems to ensure the water you put in your body is at its safest and purest form.
Stage 1- removes sediment, dirt, rust, slime, and protects the carbon filter
Stage 2- the activated carbon block removes THMs, chlorine, lead, VOCs, bacteria, pesticides, and herbicides.
Stage 3- a thin film membrane separates heavy metals and the extreme dissolved chemicals
Stage 4- an alkaline filter polishes and adds the essential minerals back into the water for a healthy & amazing taste

Check out our products here

If this article was informative or interesting, follow Kleenatap on social media for more helpful information on health, water, the environment, and more!